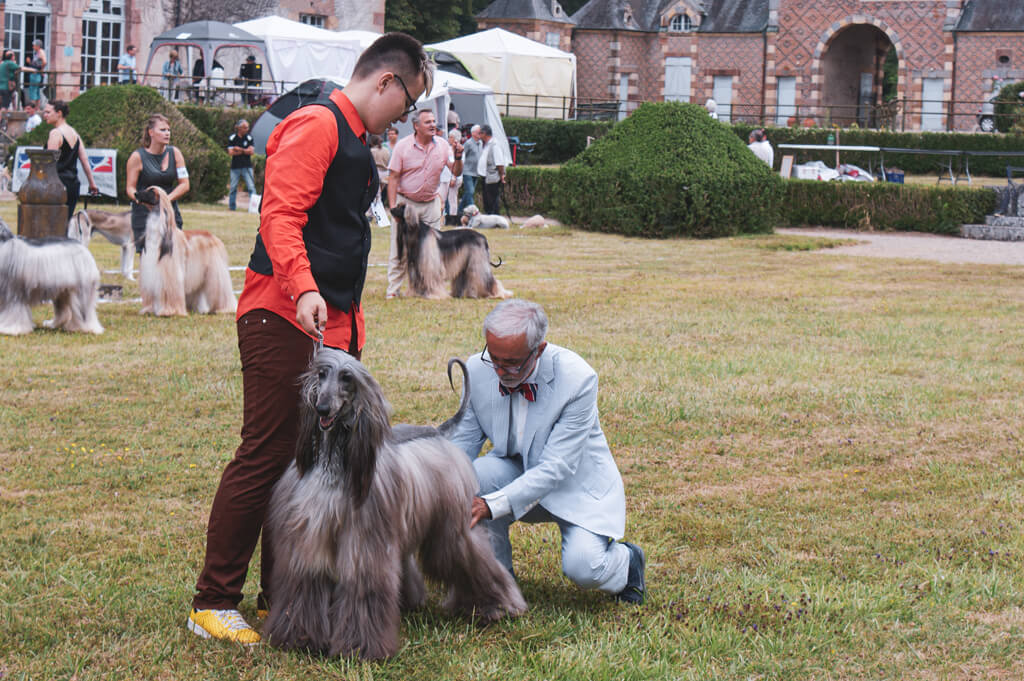 When the dream came true

We decided to enroll Alexi to the famous FALAPA, just to take the temperature in Gallic Land. Rubbing shoulders with the French is no easy task but very exciting, especially when you don’t speak their language and your name comes from a small town only 2,000 km East from Paris.

Somewhere in the Allier, in the middle of nowhere, around a castle, a show is being held. In all relaxation we put down our suitcases and prepare the competition. Alexi is entered in the Champion class. They are 16 participants. The judge, an American by the name of Richard Souza, owner of the Costwind kennel, is dreaded. He is hard, cold, lets no emotion on his face during his judgement. He has the peculiarity of not liking the afghan with a lot of hair. A priori, Alexi does not pass in his ropes. The tension is felt on both sides of the ring. There is only one show. No room for error.

Ervoann doesn’t have to worry about Alexi being an outsider. Out of the 16 and despite his dandruff, Alexandre Dumas will be second, which is a big surprise for us. So many emotions within our small group.This unexpected result gave us wings for the continuation of the Expedition to Unknown Lands. In the Kingdom of Hugues Capet where it is not easy to impose oneself.

A real godsend and knowing his qualities as a sprinter, tomorrow in the cursing the luck could smile on him a second time. Tomorrow there will be the cursing, our chances are minimal, if we stay on the same track as today, then we will be able to make good results, especially in the combined.

Some owners laughed when they saw our hairball Alexi, these regulars of big events had committed the irreparable: ,,Never underestimate your rival’’. After the first round, some bad tongues got the caquet in two steps, three measures. The second round Alexi made a nice race which propelled him to the first place in the coursing and in the combined too.

It is after this pharaonic episode that the idea came to try to be French National Show Champion, as we won the most difficult round. A very complicated exercise when you are not French, even if you speak the language of Voltaire!

The rest of this article will speak for itself. Ervoann and Alexi will form a nice team and will have excellent results. From North to South and from East to West they impressed us. And in the end, there is not one title for the sacrament but 2 titles in France: French National Show Champion & French Laureat Standard & Performance

And if now we could start dreaming. Madrid 2020: next stop with well determined objectives. What a great source of motivation!

Previous
Next
PrevPreviousThe Balkan Tour
NextLove in the airNext